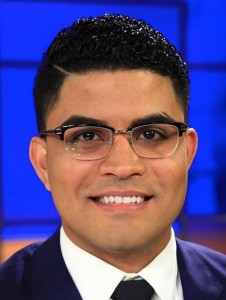 Jesús López has joined KERO as the Bakersfield ABC affiliate’s 5, 6 and 11 pm meteorologist. It’s his first job weathercasting in English.

“My move to Bakersfield and my crossover to English has been nothing but amazing as I keep growing as a professional,” Jesús tells Media Moves. “I’m thrilled to also keep informing the Hispanic community here in Bakersfield as I will also broadcast for Azteca TV.”

Jesús moved to California from Oklahoma City, where he has Chief Meteorologist for Tyler Media Broadcast Company.

During his year in Oklahoma City, he provided weather forecasts for Tyler-owned Telemundo affiliate KTUZ at 5 and 10 pm and in the mornings on radio station La Zeta 106.7FM.

Born in Venezuela and raised in Miami, he has a degree in Atmospheric Science Meteorology from the University of Miami.