The New York Times has launched an online mobile optimized Spanish-language website in advance of Pope Francis’ visit to Mexico later this week.

The site, which will cover “news and issues of interest to a Spanish­ speaking audience,” will be run out of Mexico City under the leadership of editorial director Elías López. 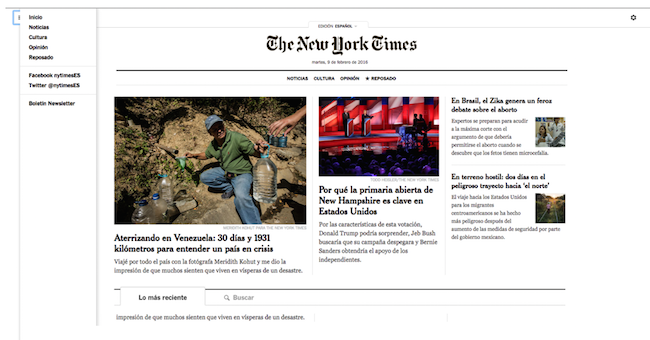 The Spanish-language digital edition will also tap into the NYT’s correspondent pool. Azam Ahmed, Kirk Semple and Elizabeth Malkin in Mexico, Nicholas Casey in Venezuela, Simon Romero in Brazil and Argentina, Frances Robles in Miami, along with NY editorial board member Ernesto Londoño, will be among the NYT staff journalists that will contribute to the Spanish-language website.

The team will curate and translate 10 to 15 Times news and opinion articles each day. The site will also feature some original Spanish-language reporting.

The content on NYTimes.com/es is free and won’t count against the 10 ­article a month limit for non­-subscribers. The NYT is additionally launching a weekly newsletter called Boletín.