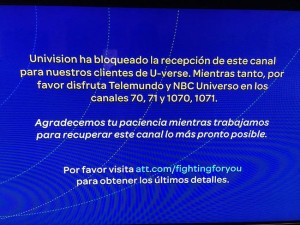 ATT U-verse customers who tune in to Univision today won’t be able to see the network. Instead, they get a message saying Unvision blocked its programming on U-Verse and encourages viewers to tune in to Telemundo and NBC Universo.

The outage, which went into effect at midnight, is due to Univision and AT&T U-verse’s inability to reach an agreement over retransmission fees.

UniMás, Galavisión, and Univision Deportes are also affected by the blackout.

“Despite Univision’s tireless efforts to reach an agreement, AT&T is denying its U-verse customers access to our networks and stations, which have the most popular Spanish-language news, sports and entertainment,” Univision said in a statement.

AT&T, which has about 6 million U-Verse customers nationwide, blames Univision.

“This is about nothing more than Univision demanding we pay an outrageous price increase. We are fighting for all of our customers to keep what Univision charges at a reasonable amount,” the pay-TV operator tells customers on its “fighting for you” website.

But Univision goes a step further, accusing AT&T of “discriminatory behavior” and “redlining our audience by refusing to recognize the value of the Univision networks and the consumers we serve….These disputes can be confusing for consumers, but in our case it’s simple: we must receive fair compensation, on par with English language broadcasters.”

AT&T U-Verse has been trying to negotiate lower fees for the TV networks it carries. Last year, it faced off against CBS, but was able to reach a last minute deal, avoiding a network blackout.

The company has had disputes with other media companies and stations, most recently in January of this year with Fox affiliate WSVN in Miami, which went dark right before the Super Bowl. A last minute agreement was also reached in that case.

Univision’s networks are all available on DirecTV, which AT&T U-verse acquired last summer and are covered by a separate contract negotiated with lower subscriber fees for those channels.

Univision has been lobbying its viewers with “special announcements” on TV and on social media asking them to call AT&T Uverse to keep the network on the air.