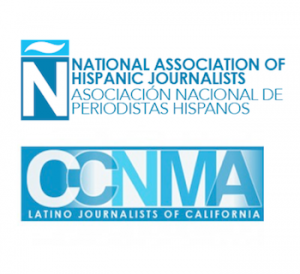 More than 10 years after former NAHJ President Juan González first proposed a merger between NAHJ and CCNMA, both journalism organizations have come to such an agreement in California.

The board of directors of NAHJ LA and CCNMA have signed a memorandum of understanding that will make CCNMA a chapter of NAHJ in Los Angeles.

“This has been a year and half in the making,” NAHJ President Mekahlo Medina tells Media Moves. “Past CCNMA president Yvette Cabrera and I have been talking about it and coming up with a plan since I became NAHJ president. We saw how both organizations were working for the same goals and we believe the merger will help CCNMA stabilize and grow. For NAHJ, it means we will have a powerful and historic group under our banner and together we can worked united to demand better representation of Latinos in newsrooms and provide for more job opportunities.”

Under the terms of the agreement, CCNMA will keep its board of directors, non-profit status and independence, but will be under the purview of NAHJ, operating as a chapter.

All NAHJ California members will automatically become CCNMA members with 100% of their dues kept by CCNMA in the first year and 70% in the second year.

This arrangement excludes NAHJ chapters in San Diego and the San Francisco Bay Area, which will continue to operate independently.

The L.A. chapters will fold into one board – CCNMA’s. The current NAHJ LA board will be dissolved in June. Two NAHJ board members will be appointed to open positions on the CCNMA board until elections are held in January.

“I knew this day would come. In a way, I embody the new partnership in Los Angeles. I was born and raised in East L.A. and CCNMA inspired me to pursue journalism,” says CCNMA President Joe Rodriguez. “I think NAHJ and CCNMA are on parallel paths to the same goals. NAHJ will take the lead in advocacy for Latino journalists and the fair and accurate coverage of Latino communities and issues. CCNMA will experiment and create programs that other NAHJ chapters can adopt.”

Based on the status of NAHJ’s finances after its 2016 annual conference, the national board will decide whether it can commit the funds to hire a CCNMA administrative manager who will also perform duties for NAHJ.

The organization, which gave birth to NAHJ in the early 80’s, has faced financial difficulties in the past decade. Although CCNMA has a debt load, the MOU states NAHJ will not be responsible for the financial liabilities accrued prior to the partnership.