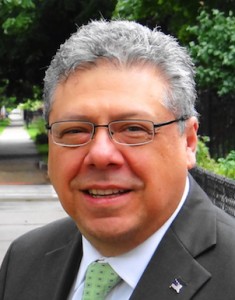 The fate of Javier Salas’ political aspirations could be sealed tomorrow.

Tomorrow’s  Illinois primary includes the state’s congressional races, so it’s highly likely we’ll know who the winner of that seat will be by the end of the night.

Salas told Media Moves he decided to run because he was “tired of the inaction in Washington, D.C.”

He pointed out that although “the district is 75% Mexican, they’re not interested only immigration, but also on education, jobs and community development.”

Gutiérrez, best known for advocating for immigration reform, has been representing the 4th district since 1993.

Salas, an immigrant from Mexico who was a Univision Radio fixture for 16 years, insists “it’s time for a change.”

The Chicago Tribune and the Chicago Sun-Times both endorsed Gutiérrez, claiming he’s the best choice given Salas’ lack of experience as an elected official.

Salas’ only political experience is as an advisor to former Illinois Gov. Pat Quinn from 2013 to 2015. He has also worked with grassroots community organizations focusing on pro-immigrant issues. Along with other Spanish-language radio personalities, he helped organize the 2006 immigration marches in Chicago.

“My interest in politics started while I was doing radio, doing advocacy for immigration,” he says. “I think we need a new voice that truly represents our community. I believe in what Luis did in 2006 and 2007. But I realized he’s using our community for political advantage. The issues are changing for us. In 2005 and 2006 immigration was a big issue. Now, it’s about getting our young people opportunities in school, jobs and starting a business. He has stereotyped us into ‘Latinos are immigration and immigration is Latino.’ That’s so wrong.”

Salas argues that Gutiérrez lost some influence in the Latino community when the Congressman endorsed Rahm Emanuel over Mexican-born Chuy García for Chicago mayor. He believes that endorsement will cost Gutiérrez Latino votes in the election.

“This is not about me defeating someone,” says Salas. “It’s about serving my community. And there’s so much diversity in our district. It’s not about just Mexicans, there are Cubans and African Americans. If I’m elected, I’m going to be a congressman for everyone.”