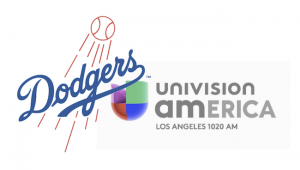 The Dodgers and Univision Los Angeles today announced they’ve signed a three-year partnership deal, keeping the L.A. team’s games on KTNQ 1020 AM through the 2018 season.

Hall of Fame broadcaster Jaime Jarrín, known as “the Spanish Voice of the Dodgers” started his 58th season on the broadcast booth last month. His son Jorge, joins him for a second season on Univision Radio KTNQ 1020 AM, continuing as the only father-son broadcasting team in MLB Spanish-language radio.

The new deal covers the rights to games through the 2018 baseball season. Univision’s KTNQ-AM 1020 will air all 162 regular-season games in the Los Angeles market, 8 Spring Training games per year and any potential postseason games.

The partnership includes full advertising and marketing support to include all Univision-owned radio and television stations and support on their digital platforms.

Univision will also play a role in all Dodger Hispanic-marketing initiatives, including its marquee Viva Los Dodgers program and media support for all Dodger promotional programs.