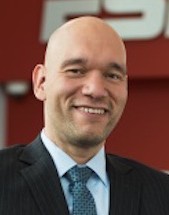 Freddy Rolón has been promoted to VP and General Manager of ESPN Deportes. He’ll report to Russell Wolff, EVP and Managing Director of ESPN International.

In his new role, Rolón will oversee all aspects of the ESPN Deportes business including ESPN Deportes television, working closely with ESPN’s programming, production, audio, digital and print media teams, to elevate the relevance and appeal of ESPN’s English-language products to U.S. Hispanic fans.

Rolón will leverage the company’s multi-country capabilities, including its new Mexico City studios by collaborating with Gerardo Casanova, VP and GM, ESPN Latin America North (Mexico and Central America) on audience and content development to maximize the engagement of Mexican and U.S. Hispanic sports fans.

Rolón joined ESPN in 2004 as Senior Manager, Marketing for ESPN Deportes, getting promoted a year later to Senior Director of Marketing and Integration of ESPN Radio. He has been VP ESPN Deportes Programming and Business Initiatives since 2011.

During his time with the company, Rolón has also been responsible for the ESPN Deportes Radio and ESPNDeportes.com businesses, coordinating efforts between ad sales, affiliate sales and production teams in Bristol, Mexico City, Miami and Los Angeles and worked with ESPN business leaders to manage start-up phases of new business initiatives, like ESPN Local.