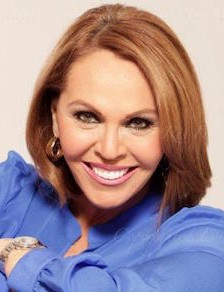 Univision anchor María Elena Salinas will be busy traveling cross-country picking up honors for her work – in front and behind the cameras – during the month of May.

The National Association for Multi-ethnicity in Communications (NAMIC) will bestow María Elena with its 2016 Mickey Leland Humanitarian Achievement Award on May 18. She’ll receive the honor during NAMIC’s annual awards breakfast at this year’s INTX Show in Boston.

The award, named after Texas Congressman Mickey Leland recognizes individuals and companies representing the media, entertainment and communications industry for their philanthropic achievements and commitment to advancing the concerns of people of color.

“I am so honored to receive this humanitarian award because I have always believed that my job, our job, in Spanish-language media goes beyond the headlines,” María Elena tells Media Moves. “We have a responsibility to our audience to provide them with the information that will improve their lives in what to many is their newly adopted country. I hope I am accomplishing that somehow and that I am helping to give a voice to the voiceless.”

One of the most recognized Hispanic female journalists in the United States, she is one of the founding members of the National Association of Hispanic Journalists. She was also instrumental in the creation of the Hispanic Scholarship Fund and started her own scholarship fund to support Hispanics students interested in journalism, sponsored by NAHJ.

María Elena, who recently celebrated 30 years with Univision, will also be receiving two honorary doctorate degrees – one from American University and the other from Cal State Fullerton. She will also be a keynote commencement speaker at both universities.

“I am humbled and honored that the board of trustees of these two incredible universities have concluded that my body of work deserves to be recognized with a doctorate degree. My parents would be so proud of me.”

María Elena will address American University graduates of the School of Communication on May 7 and serve as keynote speaker for Cal State Fullerton commencement ceremonies May 21-22.