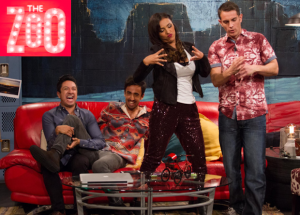 The show, taped at the LATV studios in Los Angeles, airs Monday through Thursday at 6 pm PT/9 pm ET, tackles gossip, entertainment news, and features guest interviews and man on the street segments.

“The Zoo” is produced by Andrés Palencia and directed by Daniel Vélez.

The talk show is part of LATV’s new programming lineup, announced during its New York upfront in late April.

Other shows focusing on sports, food and health, are scheduled to debut later this year.