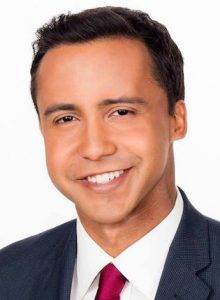 Bryan Llenas is getting a new role at Fox News. He has been promoted from weekend reporter to full-time weekday national correspondent for the network.

“This opportunity will give me a chance to dedicate all of my time to getting better at my passion – which is telling stories on TV all week,” he shared on Facebook.

Based at Fox News headquarters in New York, Bryan will cover breaking news, including the latest in the 2016 presidential election.

Bryan, who started his broadcast career as an intern at Fox News in 2009 and graduated from the Ailes Apprentice program in 2011, was part of the launch team for Fox News Latino, where he has been a reporter for almost 6 years.

He added weekend reporter duties for Fox News Channel in 2013.

The promotion means he’s leaving Fox News Latino, although he’ll continue to be a contributor. In his Facebook message, he says he’s thrilled with the new opportunity, which marks a “bittersweet” moment in his career:

“I can’t thank the Fox News Latino.com family enough for everything they’ve done for me; for giving me my start, for teaching me how to write for the web, and for trusting me at just 22 years-old to get the job done. I’ll still be contributing to the site anyway I can and together we will work tirelessly to make sure that the Latino community gets its voice heard. Thank you to the Fox News Channel family for tirelessly believing in me.”

6/23: Story was updated to include he will continue to be based in NY and that he will be covering breaking news and the presidential election.