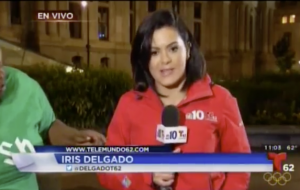 Iris was wrapping up her live shot on Wednesday night, when a woman approached her, tapped her on the shoulder trying to capture her attention, and then punched her three times.

Members of her news crew pushed the attacker away and followed her, before she was arrested.

A Telemundo spokesperson confirmed Iris is ok, her physical injuries are minimal, and that she is taking time off to recover after the traumatic incident.

Police have identified the woman as Waheedah Wilson. She has been charged with simple assault and recklessly endangering another person. According to the Philadelphia Inquirer, the woman, who has a criminal history, is in custody awaiting a preliminary hearing after failing to post bail.

This incident again highlights the dangers news crews are exposed to while reporting live.

“This appears to be a situation where our teams did everything the correct way and something bad happened. While we are thankful our safety and awareness training were beneficial in this situation, it is also a reminder that Safety is First. We are working with Corporate Security to finalize situational awareness training for the news team in anticipation of the DNC,” News Director Anzio Williams wrote in an email to staffers yesterday.

NBC 10 and Telemundo 62 President and GM Rick Harris also emphasized that “employees’ safety comes first.” He told staff via email that he, along with Williams, will “be available to discuss and answer any questions” about safety issues and concerns next Monday, June 13.