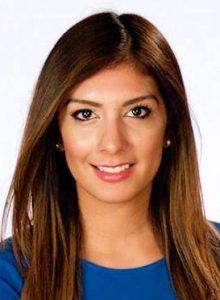 Cristina Navarrete has joined the Telemundo 47 news team as general assignment reporter. She’ll be working weekends and three other days of the week.

Her first official day at WNJU was yesterday, but she debuts on-air this Saturday, June 18.

She arrives to New York from Telemundo Wisconsin and CBS 58 in Milwaukee, where she worked as a reporter, producer and fill-in anchor for both stations since January of 2014.

She previously worked as a reporter with SoiTV and with Radio Cosmos-Universidad Autónoma de Mexico.