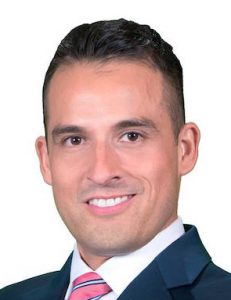 His first day at at the station is today, but he’ll make his on-air debut in early August.

Carlos arrives to Telemundo 40 from KTDO Telemundo El Paso, where he worked since 2014 until last week. He started at KTDO as host of “Hola Ciudad TV” and moved to a reporter role last year for the station’s 5 and 10 pm newscasts.

He was previously a host and reporter for Azteca América’s morning show “Breakfast Contigo” in Miami. Before that, he debuted as an actor in Telemundo telenovelas.

Before moving to Miami, Carlos spent 7 years as a host and reporter at XHIJ Canal 44 in Ciudad Juárez.

As part of a company-wide move to expand local news coverage, Telemundo announced it was adding personnel to staff another 30 minute afternoon weekday newscast to its O&O stations nation-wide.

Telemundo will debut its new 4 pm show on September 26.