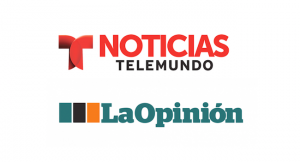 The partnership includes the launch of “Telemundo and La Opinión Present,” a series of stories on Latino issues that will appear on Telemundo Network, La Opinión newspaper, and the digital platforms of both organizations.

When asked how the partnership would work, neither company would provide specifics, other to say they would share content and that they would work closely to pick the topics of collaboration.

The content agreement may end up being more favorable for La Opinión, which during the past year has seen a massive editorial exodus between layoffs and staffers leaving the paper for better opportunities with only a handful of reporters remaining to cover local news.