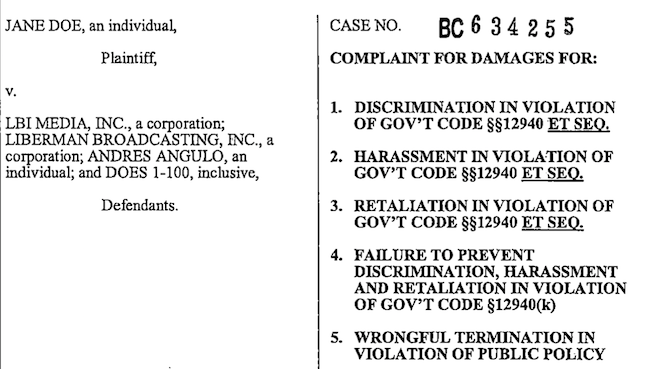 Estrella TV parent company LBI Media Inc., Liberman Broadcasting, Inc. and Andrés Angulo are being sued by a former anchor who claims she was fired for reporting sexual harassment.

In the lawsuit filed in Los Angeles Superior Court, the anchor is suing for wrongful termination, sexual harassment and breach of contract.

The lawsuit lists the plaintiff as Jane Doe. But all the information listed in the document indicates the anchor in question is Adriana Ruggiero, who was hired in 2013 and was national anchor until April of this year.

A source has confirmed Ruggiero is Jane Doe. 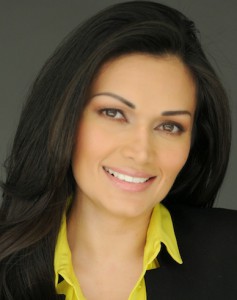 Media Moves obtained a copy of the lawsuit, in which Ruggiero claims Andrés Angulo, Estrella TV’s Vice President of News, told her the company’s owner Lenard Liberman thought she didn’t look sexy enough to be promoted to national newscast anchor.

Angulo allegedly told Ruggiero she had “a beautiful pair of tits and should show them more.”

In the complaint, Ruggiero says she met with LBI’s general counsel and the VP of Human Resources, and suggested the company should investigate Angulo’s treatment of all the women at the station.

She claims she was terminated on April 20, 2016 due to her sexual harassment complaint.

Her last day on the air was April 29.

The lawsuit seeks past and future lost wages, “general damages for mental pain and anguish and emotional distress,” as well as punitive damages to punish LBI for wrongful conduct and “deter such conduct in the future.”

An LBI company spokesman would not address the lawsuit and accusations of sexual harassment. “Per company policy, we don’t comment on pending litigation.”

You can read a much more in-depth account of the accusations listed in the complaint in my story on Forbes.