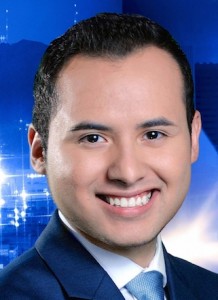 Benjamín Zamora is leaving Entravision’s KINT in El Paso, where he is a reporter and assistant news director, to become the 11 pm anchor of “Noticias Univision Nevada” at KINC-15, the company’s station in Las Vegas.

Gabriel Preciado, who currently anchors the 6 and 11 pm, will step down from late night newscast.

Benjamin’s last day at KINT is October 5. He starts at KINC on October 10.

This is a big move for Benjamín, who has lived and worked most of his life in El Paso.

“It’s not easy to leave my city, my environment and the life I’ve known for over 20 years. This is where I was born here, I grew up, got I married and my daughter was born,” he shared on his Facebook page.

Before joining KINT in 2014, he worked as an MMJ for KTSM NBC El Paso and and as news reporter/producer for KTDO Telemundo El Paso.