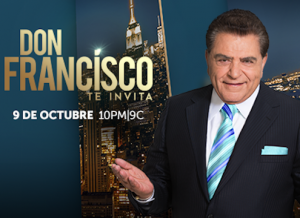 A year after “Sábado Gigante” ended its 30-year run on Univision, Mario Kreutzberger, better known as Don Francisco, starts a new phase in his television career with a Sunday night talk and variety show on rival Telemundo.

“It’s a talk show very much modeled like talk shows in general market,” Telemundo President Luis Silberwasser tells Media Moves. “The audience will see not only the Don Francisco they know and love, but they’ll also see him in a whole new light, which is the Telemundo signature – much more contemporary, more modern. I think the combination of Don Francisco and Telemundo is pretty powerful.”

The new Sunday night talk and variety show will have a studio audience, will spotlight eminent world personalities, musical guests, and comedians, as well as people with amazing stories.

“Don Francisco Te Invita” will also feature its own band of six professional female musicians performing throughout the show, who will interact with Don Francisco.

The studio audience will get to actively participate through an integrated digital system in their seats allowing them to vote and choose their favorite segments.

Don Francisco joined Telemundo in March of this year when he signed a multiyear production deal with the network for an undisclosed sum.