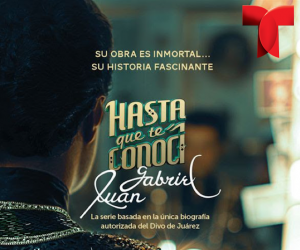 Airing just two weeks after the death of the music icon, “Hasta que te conocí” ranked as the highest-rated, scripted weekend premiere in Spanish-language TV in more than five years among total viewers (2,913,000) and A18-49 (1,358,000), according to Nielsen.

The show also reached a cumulative audience of 4,724,000 total viewers.

Adding the before and after Juan Gabriel specials gave Telemundo its best Sunday night performance ever among total viewers from 7 to 11 pm, averaging 2,402,000 leading Univision by 84% (1,307,000).

The series outperformed Univision’s premiere of “La Banda” season two by +112% and +154%, among total viewers and adults 18-49, respectively.

The premiere of “Hasta Que Te Conoci” also ranked as the #1 most-engaging primetime show on Facebook, regardless of language, with 168,000 global actions, outperforming Univision, NBC, CBS and Fox, according to ListenFirst. The series premiere generated a total of 181,000 actions across all social channels.

Telemundo has been enjoying a historic weekday primetime ratings streak over Univision. The NBCUniversal-owned network was again the #1 Spanish-language broadcast network among adults 18-49 for an eighth consecutive week for the week of 9/5/16, beating Univision during M-F prime 7 to 11 pm (821K vs 801K).