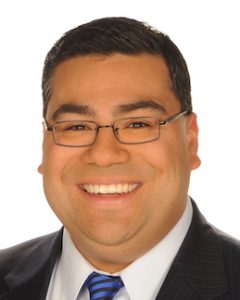 Albert Ramon has been promoted to Chief Meteorologist at KVUE. He will now appear on the station’s 5, 6, and 10 pm newscasts.

Albert, who had already been filling in on the afternoon and evening newscasts, officially starts his new role today.

Albert has been working as the morning meteorologist at the Austin ABC affiliate for the last 6 years.

He joined the KVUE Storm Team in October of 2009 as the weekend morning and evening meteorologist. He moved to weekdays and joined the “Daybreak” and “KVUE News Midday” team in June of 2010.

Albert started as a meteorologist for KZTV in Corpus Christi, where he worked from 2005 to 2009.