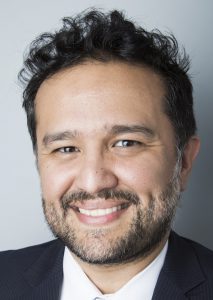 Edgar Aguirre is leaving public radio for a job at the Academy of Motion Picture Arts and Sciences, home of the Oscars.

In his new role, he’ll help the organization, which has faced stinging criticism over its lack of diversity, provide more opportunities for professionals from under-represented communities in the entertainment industry. He’ll also lead fundraising for key educational initiatives.

Edgar has worked at KPCC for the past five years. He began as Community Outreach Director in 2011, before getting promoted to Managing Director of External Relations and Strategic Initiatives in 2013.

“My experience at KPCC taught me the value of persistence, of ensuring that you maintain a dialogue about the importance of hiring and retaining diverse talent,” he tells Media Moves. “I eagerly look forward to applying all of these learnings into this new role.”