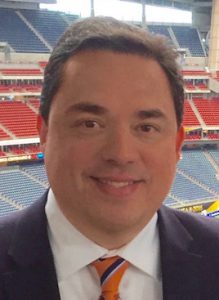 He will appear regularly on the live sports show “Jorge Ramos y Su Banda” and will also contribute to ESPNDeportes.com.

Jorge most recently provided play-by-play commentary for NBC Universal. He previously had a 16-year career with Univision, where he called four FIFA World Cups, boxing matches, and co-anchored on the “Contacto Deportivo” sports show for more than a decade.

He started his U.S. broadcast career in 1998 as a weekend sports anchor for Univision affiliate KINT in El Paso and morning news host for KSVE 1150 AM Radio Única.

He began his on-air career at Núcleo Radio Guadalajara where he served as program director for on-air talent and later for MVS Radio.