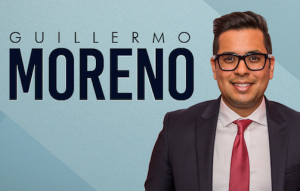 Guillermo Moreno has landed his own radio talk show on iHeartMedia Fresno.

“The Guillermo Moreno Show” debuts on KALZ PowerTalk 96.7 and AM 1400 next Tuesday, January 3. The local talk program will air live weekdays from 6 to 8 pm PT.

According to the station, Moreno, a member of the Fresno County GOP and California Republican Hispanic Assembly, will “take a conservative approach to local and national issues from the perspective of a Latino millennial.”

Moreno was born and raised in the Central Valley. While attending Andrews University, he helped created a campus television station and hosted his own political talk show.

After graduating from Michigan State Law School in 2010, Moreno returned to Fresno, where he has been actively involved in the Republican party. He has previously been a guest onPowerTalk 96.7 talk shows.