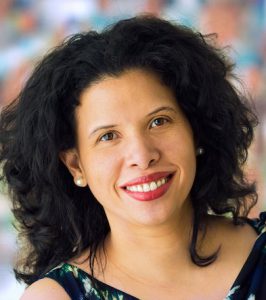 Her first day will be Monday, January 23.

In an email to staff, Keith Woods, NPR’s VP for Diversity in News and Operations, announced the new hire, saying “We chose Juleyka because of her leadership style and managerial experience, her subject-matter expertise, and her editorial imagination.“

A staff Writer at The Atlantic since February, she previously worked as Managing Editor of the National Journal’s Next America team.

A native of the Dominican Republic, Lantigua-Williams has been a writer and editor for 15 years. She was a nationally-syndicated columnist, with her opinion columns appearing in The Houston Chronicle, The Miami Herald, The Chicago Tribune, and the L.A. Times.

She has also worked as a journalist for TedxFulbright and has contributed to multiple publications, including JET Magazine.

I’m thrilled to announce that we’ve hired the new Senior Supervising Producer/Editor of Code Switch, Juleyka Lantigua-Williams. She comes to us from Atlantic Media, where she was Managing Editor of the Next America team for the National Journal and, more recently, a staff writer covering criminal justice for The Atlantic. Juleyka will begin on Jan. 23, and we’ll introduce her around the newsroom throughout that first week.

She brings to NPR a career’s worth of experience focused on issues affecting all Americans, especially communities of color, with a specialization in criminal justice, including a John Jay College reporting fellowship covering juvenile justice. Juleyka helped the Next America team triple the site’s page views, expand its visual and social media footprint, and, most importantly, substantially beef up its editorial output covering demographic changes across the country. She moved on to editing and specialized writing when the company merged Next America with The Atlantic.

Juleyka holds a master’s degree from Boston University, a B.A. From Skidmore College, and will receive an MFA (creative writing) from Goddard College next month. She has also done a Fulbright in Madrid and is a graduate of the Radcliffe Publishing Course. She’s fluent in Spanish.

We chose Juleyka because of her leadership style and managerial experience, her subject-matter expertise, and her editorial imagination. She is an immigrant (the Dominican Republic) who grew up in The Bronx and lives in Rockville with her husband and two children. I’m confident that her caffeinated enthusiasm will ignite ideas in everyone around her, and her laugh will make you laugh. Juleyka’s connection to NPR began in Miami in 2000 when she was getting her first graduate degree and she joined Shereen Marisol Meraji in the inaugural Next Generation bootcamp with Doug Mitchell.

I’d like to thank Victoria Visgilio for leading this search, and Chris Turpin, Edith Chapin, Vickie Walton James, Sara Goo, Luis Clemens, and Alison MacAdam for helping me to choose the right leader. Thanks, also, to Carol Touhey and Micaela Rodriguez for providing support through the process, and Doug for the first introduction.

Juleyka will help to choose the senior editor who will serve as the No.2 on the Code Switch team; a job that will be posted shortly. She emerged from a diverse list of excellent finalists, so please check with Victoria or me if you’d like to consider the best of our finalists for another position in the newsroom.