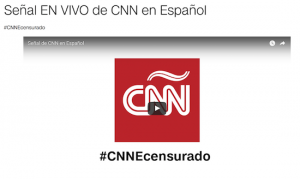 CNN en Español has turned to YouTube to continue offering its news programming after the Venezuelan government yesterday ordered cable providers to block the network.

According to CNN, Venezuela banned the Spanish-language cable network days after it aired an investigation into the alleged fraudulent issuing of Venezuelan passports and visas.

CNN and CNN en Español teamed up in a year-long joint investigation that led to the special report “Passports in the Shadows,” which the networks say uncovered serious irregularities in the issuing of Venezuelan passports and visas, including allegations that from 2008 to 2012, 173 individuals from the Middle East were issued Venezuelan passports and IDs – some of them connected to the terrorist group Hezbollah.

Venezuelan government officials refused to answer any questions about the allegations, insisting they are lies and that the report threatened “the peace and democratic stability” of the country.

In a statement, the Spanish-language news cable network said it wouldn’t back down from censorship:

“CNN en Español will continue to fulfill its responsibility to the Venezuelan public by offering our live signal on YouTube free of charge and news links on CNNEspanol.com, so they may have access to information not available to them in any other way.”