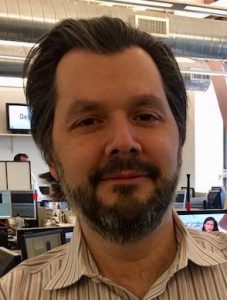 Gustavo Serrano has started a new job as Executive Producer for i24 News.

He was one of a small group of journalists hired for the launch of the U.S. version of the Israeli international cable news channel, set to debut Monday, February 13 at 6 am ET.

Serrano will EP “Stateside with David Shuster,” which will air weekdays from 9 to 10 pm, as well as one hour of “Crossroads,” from 6 to 7 pm.

Both shows will cover top U.S. and international news.

“Nothing gets me more excited than international news. So when the opportunity came along to launch another international network I knew I couldn’t pass it up,” Serrano tells Media Moves.

Serrano was part of the team that launched Al Jazeera America in 2013, which shut down its operations in April of last year due to low ratings and economic problems. But he has a positive outlook for the U.S. expansion of i24 News.

“Building a news network in an already crowded market is never an easy task, but with that challenge comes an opportunity to tell and deliver important stories from around the world that in many cases go under reported. That’s what sets you apart from the competition. That’s our goal at i24,” he says.

Launched in 2013 and headquartered in Tel Aviv, i24’s U.S. operations are based in New York with a separate bureau in Washington, D.C.

At launch, the channel will air U.S-produced programming from 6 to 10 pm, with the rest of the content coming in from the Tel Aviv headquarters.

Initially, viewers will only be able to see i24 News on Altice USA’s Cablevision and Suddenlink systems.

Before joining i24 News, Serrano was Executive Producer for TEGNA Media, tasked with improving morning programming performance for NBC affiliates around the country. He previously worked as a producer and writer for ‘Good Morning America’ after Al Jazeera’s shutdown.