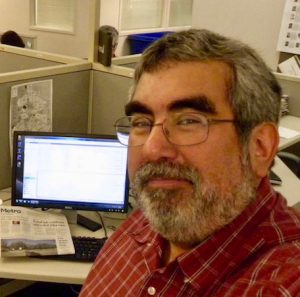 Today is his first day in the new job.

Piña had been at the Morning News almost three years, exiting the company as a Metro Print Team Designer.

“The Dallas Morning News recently announced that is outsourcing the design work to Gatehouse Media and trimming the newspaper’s print teams. I didn’t wait to find out if I made the cut.

Instead, I sent out résumés and was fortunate to get hired on as a copy editor at theBlaze.com in Irving, Texas,” Piña tells Media Moves. “I look forward to this new opportunity and challenge, but I know that I will miss the newspaper world. Newspaper has been my life.”

Piña spent over 20 years a news editor and page designer at the Fort Worth Star-Telegram, until he was laid off in 2008.

Piña is a lifetime member of the National Association of Hispanic Journalists and Hispanic Communicators DFW.