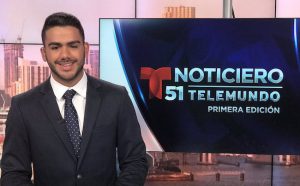 The 21-year old will be tasked with attracting and engaging a millennial Spanish-language viewing audience.

Prior to Telemundo 51, Adyan worked as a personal assistant to singer Marc Anthony at Magnus Media in Miami and as entertainment contributor for CNN en Español’s program “Show Biz en Español.”

He was previously an on-air news reporter for Caracol’s syndicated morning program “El Show de Julio Sánchez Cristo,” as well as entertainment reporter for Mega-TV and Azteca TV in Miami.