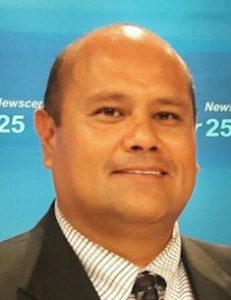 James Muñoz has landed a new job as weekday morning anchor at KAVU in Victoria, Texas.

He co-anchors “Your Hometown News Sunrise” with Jasmine Haynes from 5 to 7 am.

He started on the station’s 35th anniversary – July 21.

The new gig brings him back to the anchor desk after a stint in a public relations job – and closer to his roots. KAVU covers the Rockport area.

“My third great grandfather, James Murray Doughty was one of the founding fathers of Rockport. He was also first sheriff of Refugio County another area KAVU covers,” Muñoz tells Media Moves.

Muñoz previously worked as as News Director at KWES NewsWest 9 in Midland under his other last name – Doughty.

He has been using his mother’s maiden name – Muñoz – for his on-air work since 2002.

His past experience includes 11 years as reporter for KENS in San Antonio and News Director and anchor at KACB-TV in San Angelo.

A 4th generation Texan, Muñoz Doughty’s entire career has been in his home state.