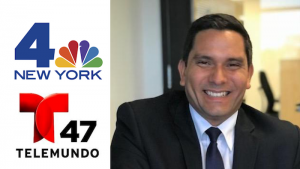 San Juan-based freelancer Julio “Gaby” Acevedo will report in English and Spanish for both stations, delivering daily updates for NBC 4 and Telemundo 47, as well as all NBC and Telemundo-owned stations across the country, with his coverage available on the stations’ mobile and digital platforms.

The new bureau launched yesterday and will operate through February, 2018.

NBC News has also established a temporary bureau on the island. It rented a space in San Juan and has a full time producer on site helping with logistics and editorial. News teams are going back and forth to the bureau as stories warrant, including Gabe Gutiérrez and Tammy Leitner who have been reporting on this story since the hurricane hit.

Leitner is there this week, with another correspondent heading out there next week.

The hurricane’s impact resulted in long-term challenges for the island’s 3.5 million residents, many of whom have family and close ties to the NY area where more than 1.4 million Americans of Puerto Rican descent live.