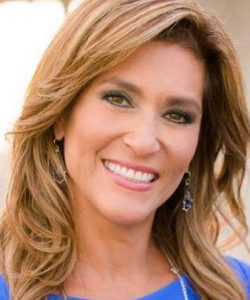 She announced her departure late last month to spend time with her family, despite recently having signed a new contract to remain at the station, according to the San Antonio Express-News.

“The last 19 years have been the most memorable, pleasurable and exciting years for me and my family. I feel so fortunate to work for such a supportive company that allowed me to have the time to be a good mother, as well as a contributor to the most trusted and committed news station in town,” she told viewers in her farewell message at the end of last night’s 10 pm newscast.

“I look forward to spending time with my young children and my family after a 26-year career of working in the evening news. I do look forward to many a quiet night at home, doing the things most families get to do.”

The San Antonio native said she would be staying put in her hometown.

Lucero has anchored the KENS 6 and 10 pm anchor for over a decade, starting out at the station as a 5 pm anchor and reporter in 1998.

She previously worked two years as a weekend anchor and reporter at WBBM CBS 2 in Chicago. Before that, she as a news and sports anchor from 1993 to 1996 at KWEX Univision San Antonio.

You can watch her on-air farewell message below: