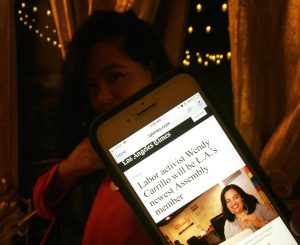 She’ll be serving out the term of former assemblyman Jimmy Gomez, who was elected to Congress in June. She heads to Sacramento in January, representing Assembly District 51, to start the second year of a two-year term.

Carrillo ran against Gomez for the congressional seat vacated by Xavier Becerra. Gomez later endorsed her for his assembly seat.

In a Facebook post, Carrillo shared the LA Times article acknowledging her win: “Don’t wait to be tapped on the shoulder. Work hard. Believe in yourself. Build support. Organize. Mobilize. Empower community. Stay focused. Do the work,” she wrote. “THANK YOU to all our volunteers, supporters, Labor family, and all our donors that gave big or small and made this possible. When we fight, we win.”