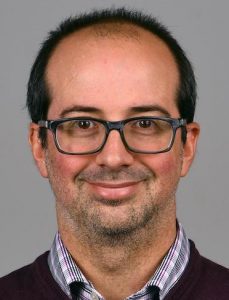 Chiqui Esteban is the Washington Post’s new Graphics Director. The paper’s Executive Editor Martin Baron and Managing Editor Emilio Garcia-Ruiz announced his promotion, praising Esteban’s skills an influence as department head for a year and a half.

“Chiqui is an unflappable journalist who performs at an ultra-high level during intense deadline pressure and despite a heavy workload. Most importantly, Chiqui makes everyone around him better by demanding excellence of himself and his colleagues. His contributions have been critical to making our graphics team one of the world’s best,” the editors wrote.

Esteban joined the Post in March 2016 as Senior Graphics Editor from National Geographic, where he was the Deputy Director for Art, Maps and Graphics. He was previously Graphics Director at The Boston Globe, where he contributed to the coverage of the Boston marathon bombing that won the Pulitzer Prize for Breaking News.

Before his move to Boston, he worked in his native Spain in several newsrooms, including roles as Digital Narratives Director at lainformacion.com, Co-Coordinator of infographics at Publico and Head of Infographics Department at Diario de Cádiz.