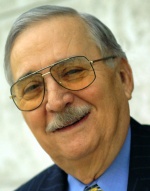 Raúl Alarcón, Sr. will receive the Medallas de Cortez Lifetime Achievement Award at the annual Radio Ink Hispanic Radio Conference on May 20. The event will be held at the Miami Biltmore Hotel.

Raúl, founder of the Spanish Broadcasting System, left his radio company in Cuba after Fidel Castro’s rise to power and moved to NYC, where he re-established his radio career as a newscaster and disc jockey. According to Radio Ink, he bought his first station in New York in 1983 for $3 million dollars.

25 years later, SBS owns 21 radio stations, in New York, Los Angeles, Miami, Puerto Rico, San Francisco, and Chicago. Raúl served as President of the board of directors of SBS until November 1999. Although he still remains on the board, the company is now run by his son, Raul Alarcón Jr.