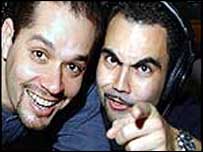 Univision Radio’s WRTO-FM “La Kalle 98.3” in Miami hired Enrique Santos and Joe Ferrero. Their new show will debut March 13 in the 6-11AM slot.

The duo hosted “El Vacilón de la Mañana” at SBS’s WXDJ-FM “El Zol 95.7” in Miami, where they crank-called president Hugo Chavez and Fidel Castro on the air back in 2003.

The DJs quit that job in 2006 and most recently had been hosting the morning show at WCAA-FM “La Kalle” in New York.