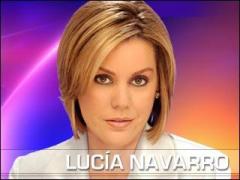 Lucía Navarro, the lead anchor of Telemundo-52 in L.A. for the past 7 years, was taken off the job the day after sweeps.

Sources tell me Lucía came in to work on Thursday, but did not anchor the 6 pm newscast. A quick glance at the station’s Website shows that her picture, bio and blog are missing.

Although unwilling to confirm the news, one executive acknowledged she will not be on the air on Friday.

Sources also tell me Lucía’s contract was up and the rumor was that she would not be renewed. I’m told it’s expected more people from the station will be axed and a lot more changes will take place in the coming weeks.

KVEA-52 has struggled with extremely low ratings for years and a lot of negative publicity in 2007, after it became known that Mirthala Salinas, Lucía’s replacement during her maternity leave, had an affair with Mayor Antonio Villaraigosa.