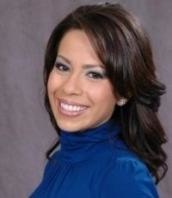 Alejandra Cerball jumps 136 markets to land in San Diego. She has just been hired as a morning and midday anchor at KGTV-10, an ABC affiliate.

Her first day on the air is April 23.

Alejandra comes from KYMA-11 in Yuma, Arizona, where she worked as a reporter and anchor since March of 2007. She previously worked as a news assistant at Fox 11 in Los Angeles. Al Corral is her agent.