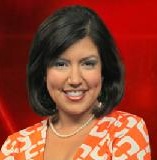 Olivia Fierro has recently been named KVVU’s principal weeknight co-anchor.  She will be on the air at  5, 5:30, 10 and 11pm weekdays alongside John Huck.

Before this gig at the Fox affiliate in Las Vegas, she worked as an anchor and reporter at KTVK-3 in Phoenix.

Her first on-air position was as a reporter at the ABC affiliate in Amarillo, Texas, eventually getting promoted to morning and midday anchor.  Before that, she was a news asssitant  at KTTV, Fox-11, in Los Angeles.