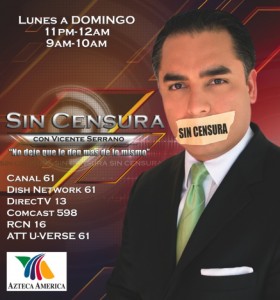 Today is the big day for Vicente Serrano. He and a group of journalists have taken a big gamble to independently produce a local news magazine, with the hopes of eventually taking it to national distribution.

“Sin Censura con Vicente Serrano” gets its start today at 11 pm. The show will run 7 days a week in the same time slot, re-running the following day at 9 am on Azteca América in Chicago.