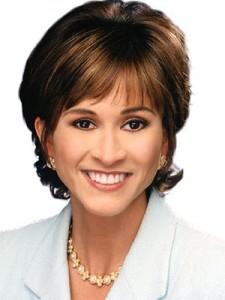 Anchor Kathy Vara, who abruptly disappeared from KABC-7’s morning newscast at the end of last year, has resurfaced. She returns to KNBC-4 to become the sole anchor of the 4:30 to 5 am newscast. She will also be a “contributing anchor” on “Today in L.A” from 5 to 7 am. Her first on-air appearance is March 29.

Kathy previously anchored “Today in L.A.” from 1994 to 2001. She went on to spend 9 years at KABC-7, most recently anchoring the 4:50, 5 and 6 am weekday morning newscasts. An L.A. Times article quotes KNBC’s general manager describing her departure from KABC as ‘friendly and amicable separation.”

A San Antonio native, Kathy landed her first job at KVII-7 (ABC) in Amarillo, moving to KSAT-12 (ABC) a year later. In 1991 she moved to Minneapolis to work as morning anchor at NBC affiliate KARE-11.