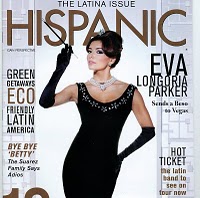 Eva Longoria is the last celebrity to grace the cover of the final issue of Hispanic magazine.

The magazine, which was founded in 1987 and was billed as the largest subscription-based Hispanic publication, has come to an end, with the Apr/May issue being its last.

Hispanic was taken over by Editorial Televisa in Nov. 2004. The Mexican company changed its name to Televisa Publishing in July of 2007.