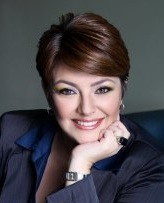 Adriana Arévalo is the news director at Univision affiliate KINC-15 in Las Vegas (owned by Entravision). She is also a columnist for Spanish-language paper El Tiempo. Well… not anymore, after her last column, which ran on July 23.

In that column she criticized the Latino Republican candidate for governor of Nevada, Brian Sandoval. A supporter of SB1070, during an interview with the Univision station, Sandoval allegedly said he would not worry about his kids getting asked for papers in Arizona, because they don’t look Hispanic. In her opinion piece, Adriana writes he made this comment with pride.

This got picked up by a political commentator, who questioned Sandoval about it, but he denies making that statement. So everyone started chasing after the famous video, with Univision refusing to release it. As it turns out, there is apparently no audio in the portion of the tape where the gubernatorial candidate allegedly makes the controversial comment. Additionally, the Las Vegas Review-Journal, published by the same company as El Tiempo, reports that Adriana wasn’t present at the time of the interview and that she was later told of the remark she went on to quote in her column.

The editor of El Tiempo says Univision officials notified the Spanish-language paper that Adriana would no longer write the column.