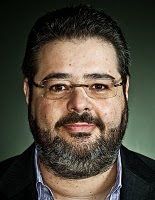 New Univision president Isaac Lee, who’s been on the job barely a week, told a Produ.com reporter the Spanish-language network will start a 24-hr news channel:

“I don’t know how quickly we’ll do it or when it will launch, but it is one of our most important projects. I think it will be very successful because the platform we have at Univision to pull it off is spectacular,” he said during the interview.

He said he plans to bring about a “revolution” to Univision, focusing on the expansion of new media and social networks, with the intention of furthering the network’s growth.

When asked if there would be staff changes, he admitted he will bring new people into the team, but that firing anyone was “absolutely innecessary” because the people currently on board are “spectacular.” You can check out this part of the video interview, which was conducted in Spanish, here.

He was also asked about his relationship with the CEOs of Univision and Televisa. Isaac said he is good friends with both César Conde and Emilio Azcárraga, but that those friendships will not interfere with his job. You can watch this part of the video interview here, where he also talks about his personal and professional background.