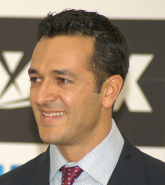 Hernán López is being promoted from President and COO to President and CEO of Fox International Channels. He’ll replace David Haslingden, who will head Fox Networks Group, once Tony Vinciquerra leaves his post on Feb. 11.