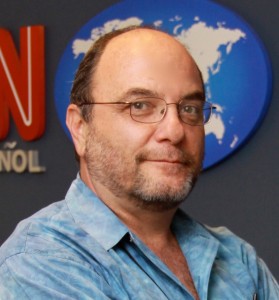 Luis Beltrán has accepted a job as Supervising Producer of TC Televisión newscasts. He starts the new gig on March 15.

Luis was a CNN en Español Senior Producer until December of 2010, when he decided to take a buyout. He had been working at the network since 2000.

“I was one of the few people in November that decided not to stay on after the ‘restructuring’ of the editorial jobs that led to the new CNÑ,” he says.

Luis tells me he conducted a news production workshop for TC Televisión last year, which led to a consulting job evaluating the network’s news department. TC Televisión offered him the job in July of 2010, but they didn’t reach an agreement until recently.

A native of Mexico, he says he likes the idea of continuing his career in international news, with his move to Ecuador, which he points out, has 10 broadcast TV and 5 cable stations serving the small country’s population of 13 million people.

Prior to working at CNNE, Luis founded “RadioSol,” Charlotte’s first Spanish-language radio station. He previously worked as a writer at Canal de Noticias NBC, and as a freelance field producer for Univision network.