Martín Berlanga announced on the air on Saturday that he was taking over the weekend news anchor seat. No official statement has yet been made regarding his new duties.

Martín was most recently a correspondent for Univision network. He replaces Enrique Teuteló, who for the past 2 years had been weekend anchor and part-time anchor of the network’s 11:30 pm newscast, “Ultima Hora.” Insiders tell me Enrique was let go on Friday. I have confirmed he is no longer with Univision.

Univision today officially announced that Ilia Calderón has been named the new anchor of Noticiero Univision’s late evening edition, now called “Noticiero Univision Edición Nocturna,” instead of “Ultima Hora.” Ilia will continue to co-anchor “Primer Impacto.” Prior to joining Univision, Ilia worked at Telemundo network. She previously worked as an anchor in Colombia. 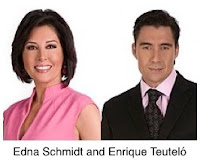 There was no mention about what would happen to Edna Schmidt or her future at the network, but insiders say she will no longer work for Univision. Edna was named network weekend anchor in 2005. She has been with Univision since 1992.