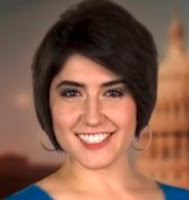 Reporter Erika González is moving to the KEYE anchor desk. She’ll be part of the new morning newscast the CBS affiliate in Austin is launching in July of this year.

“We are Austin Mornings” will air from 5 to 7 am Mon-Fri. The show is an extension of the station’s 4 p.m. features-oriented “We Are Austin Live.”

Besides being a reporter for KEYE, Erika has been anchoring 5 and 10 pm Telemundo newscasts. She joined the station in 2009, from the Fox affiliate in McAllen, Tx.