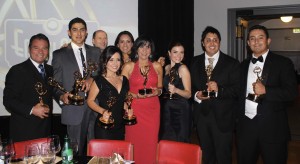 Photographer Christian Anguiano got the most awards – 7,  and reporter Santiago Lucero picked up 6.  Some of the categories in which KUVS won Emmys:  general assignment report, continuing coverage, feature news report and documentary.

The wins come one year after Pablo Iacub joined KUVS as news director.