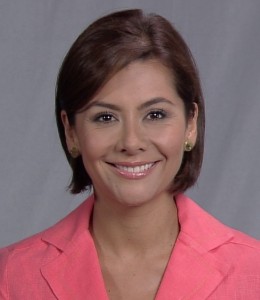 Adriana Vargas will start co-anchoring “Noticias Univision 41 a las 6 y a las 11” on Monday, August 15, 2011, alongside Rafael Pineda. Univision made the official announcement today, although news of her hire was published in a Colombian magazine over a month ago.

Adriana most recently served as the official spokesperson and director of international media for the President of Colombia, Juan Manuel Santos. Before that, she was editorial content advisor and news anchor for RCN Television’s NTN24 and RCN Radio. In 2005, she worked as an international editor and news anchor for Caracol Radio.  She was also news anchor and reporter for “Séptimo Día,” an investigative show on Caracol Television.