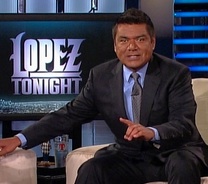 TBS today announced it was cancelling George Lopez’s late-night show after just 2 seasons due to low ratings, effective immediately.  Tomorrow night, Thursday, will be his last show on the air.

“Lopez Tonight” debuted on Nov. 9, 2009 at 11 pm.  A year later, the show suffered a huge setback when TBS signed Conan O’Brien and gave him the 11 pm time slot, moving him to midnight.

Adweek reports the move ate into Lopez’s audience, with his ratings dropping by 40% in his second season.  He went from a nightly viewership of  910,000 nightly viewers at 11 p.m. to 543,000 at midnight.  Conan, meanwhile, has averaged 1.03 million live-plus-same-day viewers.

Apparently, production costs also played a role in the network’s decision.  Lopez was making $3.5 million per year.  Conan, however, makes $10 million and his production company, Conaco, also owns the full rights to his TBS show.

The “Lopez Tonight” website lists Benjamin Bratt and Eva Longoria as the final guests on tomorrow’s show.  Longoria, by the way, was the very first guest of Lopez’s show when it debuted in 2009.