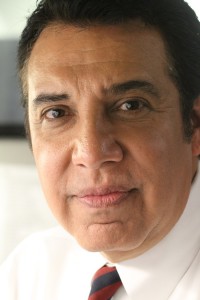 Raymond Mesa, who has been an anchor at KWHY-22 in Los Angeles for the past 9 years, is moving into management.  The Meruelo Group, which bought the station earlier this year, has named Raymond News Director, effective Monday, Oct. 10.

Ray was most recently 7 and 10 pm weekend anchor for “Noticias 22.” He also did reporting during the week.

Prior to joining KWHY-22 (while a Telemundo property), Raymond was News Director for CBS affiliate KDBC in El Paso, where he also anchored the 5, 6, and 10 pm newscasts.  He was previously the main anchor at NBC and Canal de Noticias NBC (a 24 hour news service seen in Latin America which launched in 1993 and shut down in 1997), concurrently anchoring newscasts in English and Spanish.  Before that, he was an anchor/reporter for KVIA’s “Morning Show” in El Paso.

Ray began his career in 1982 in Texas at KAMZ/KAMA Radio.